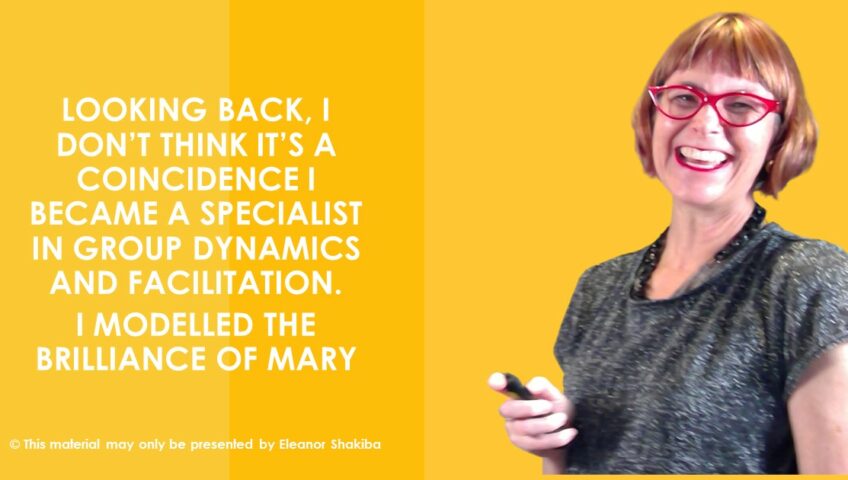 At 15, I joined the local theatre company

Signing up to a theatre group was an unusual choice for a shy, awkward teenager. I suffered badly from stage fright, a factor I first realised when I joined the school debating team. While other teenage girls were rolling their skirts up at the waist to shorten them, I insisted on buying the longest skirt I could find. Why? It meant I could cover my shaking knees while standing onstage.

But there was something about performing that intrigued me and inspired me to overcome the discomfort. I loved the work involved in rehearsing and refining a performance. Connecting with an audience inspired me. I became obsessed with getting better at stagecraft. Of course, as I practised my craft, the fear gradually subsided. It never fully disappeared, but it was more manageable now.

So, I joined a drama class during school holidays. That’s where I met my first mentor. Her name was Mary Spicer, and she was co-director of the local theatre company. I was fascinated by her tales of producing and touring plays in England before she moved to rural Australia. I questioned Mary on every aspect of performance I could think of. I wanted to know how to write plays. I wanted to learn how to stage them. I was torn between directing and acting. And I wanted to learn everything I could from my new role model.

Mary spotted something in me. She invited me to visit the theatre during one of their rehearsals. I was so excited as I walked through the stage door. A musty, dark space greeted me. The smell of theatre makeup anchored itself in my memory. I recall the lights on stage and the echo of the actors’ voices in an empty auditorium. I was mesmerised.

Mary signed me up as the youngest member of the company. I spent my weekends and evenings backstage, becoming the props assistant and then a stage manager. Occasionally, I got to play bit parts. However, most of my time was spent observing the dynamics backstage. The actors adopted me and answered all my eager questions with patience and wisdom. The lessons I learned in those conversations have lived with me for life.

As an introvert, this group was the first that I truly felt I belonged to. In the Lieder Theatre, I discovered the power of connecting with like-minded people. I encountered the resonance of positivity, which Barbara Fredrickson describes so well in her work. As a teenager, I didn’t recognise that I was immersed in a positive space. However, I did know this was something that made me feel happy and optimistic.

Looking back, I don’t think it’s a coincidence I became a specialist in group dynamics and facilitation. I modelled the brilliance of Mary, and her husband John, as they drew out star performances from their casts. I soon began writing and producing my own plays, which gave me an opportunity to try out what I’d observed in the theatre. All that experience became encoded in my work and life.

So I am grateful for the kindness and inspiration of those early role models. I also hope that I will be a similar role model for the people I meet. What I’ve learned through the dynamics of performing is that everyone has wisdom to express. We are all capable of taking our place onstage. And anyone can build the confidence and performance skills they need to express the unique blend of strengths that make them special.

About the author: Eleanor Shakiba

Eleanor is a specialist in positive psychology. Her passion is teaching talented people to use social and emotional intelligence to excel in business. These skills centre around building positive mindsets, proactive communication habits and purposeful leadership behaviours. Eleanor’s qualifications include degrees and diplomas in Social Anthropology, Positive Psychology, Counselling, Coaching, Adult Education and Neuro Linguistic Programming. She is also the author of the Positive Psychology Toolkit for HR and L&D Practitioners. This is a free resource for trainers and facilitators.