Kym had made an informal complaint about Antony ‘bullying’ her. Now Michael, their supervisor, had to sort out the situation. Michael had done the right thing by taking Kym’s complaint seriously. But he wasn’t quite sure what to do next. He called me for advice. Here’s what I explained about taking on a mediation role when you’re a manager.

Be clear about your role

Mediators are not judges. Michael’s role when mediating would be to manage the conflict resolution process. It would not be his job to decide how the situation should be sorted out. Mediators keep the discussion focussed and help people find their own solutions.

Invite both parties to participate

Mediation is a voluntary process. If both Kym and Antony were not committed to solving their problems, Michael shouldn’t use a mediation process. Michael should talk to each person in private. He should explain that mediation is a way of sorting out issues collaboratively. He should also explain the role of mediator – to keep the conversation on-track and help Kym and Antony focus on problem-solving.

Michael won’t get far if either party feels the issue has been described in a biased way. So he would need to start the mediation by creating one sentence which captured the key issue between the parties. For example, Kym believed that Antony was not ‘pulling his weight’ in terms of workload. Antony believed Kym was leaving all the ‘boring’ tasks to him. The real issue they were concerned about was fair workloads. Michael’s job was to ask questions until this issue could be identified.

Explore each person’s needs and concerns

Get your FREE chapter of Eleanor's book 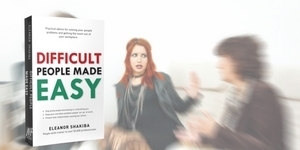 Success! Now check your email to download your free chapter.

The best solutions to any issue are those that meet all parties’ needs. Michael’s job during the third stage of mediation would be to help Kym and Antony identify all the ways their issue could be addressed. To help the discussion run smoothly, Michael could frame the brainstorming session by saying “All we’re doing at this point is thinking of possible options. Writing them down does not mean we’re committed to actioning them.” Making this clear to Kym and Antony would prevent them getting into arguments about the viability of options during the brainstorming process.

Agree on an action plan

The final stage of mediation involves selecting options from the list generated during the brainstorming session. Michael’s role at this point would be to encourage Kym and Antony to combine workable solutions. Doing this would build the commitment of all parties to actioning the plan later.